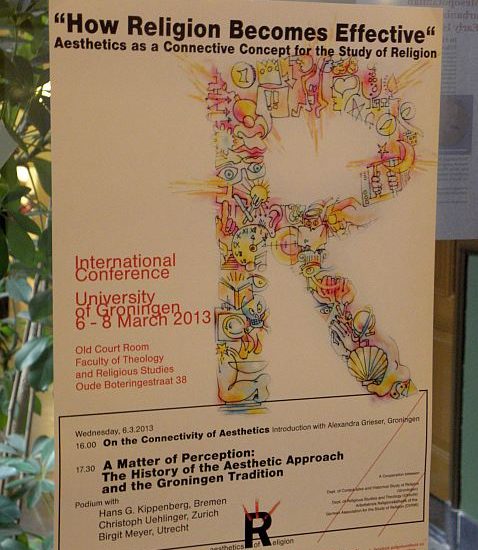 Outline : Over the past few decades, the role of the body and the senses has become a crucial objective within the study of religion, striving to overcome biased categories, which confined religion either to texts and abstract beliefs, or to an indisputable sui generis mode of experience. A critically revised understanding of aesthetics has been introduced, referring to the meaning of sensory perception (aisthesis) rather than to a philosophy of art. As an analytical framework, the focus on perception sheds light on the many ways in which religion becomes ‘effective’, on an individual as well as a societal level. Related approaches start from the question how religion stimulates and governs the body and the senses, how this is linked to meaning-making and cultural symbolic systems, and, in turn, how religious world making comes to influence social aesthetics in a larger culture.

Seeing religion as a multi-facetted cultural phenomenon, which creates convincing and ‘immediate’ perceptions of reality, it is obvious that diverse approaches are necessary to scrutinize its dimensions. Instead of opposing historical, sensory, or interpretive approaches, it should be considered whether aesthetics could serve as a “connective concept” in several ways: by allowing us to recognize a broader range of sources and media by which religions create a ‘panorama of perception’; by offering a link between perception and the history of aesthetic forms, and between individual practice and cultural ideologies; by enabling scholars to question dualist notions of body and mind, or spirit and matter; and by paving the way to critically engaging diverse academic knowledge cultures – not least the polarized debate on cognition and culture – and claims regarding how we can and how we should understand religion.

The main goal of this conference is to exchange approaches, material, and concepts and to explore the potential of an aesthetic approach for adequately describing religion as a sensory and mediated practice.